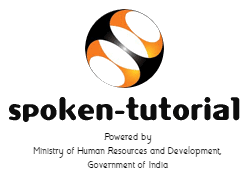 The Spoken Tutorial project is the initiative from ‘Talk to a Teacher’ activity of the National Mission on Education through Information and Communication Technology (ICT), launched by the Ministry of Human Resources and Development, Government of India. It started in 2010.
It is observed that learning is more effective when animation and narration are presented simultaneously . Audio-video demonstrations can illustrate features with maximum clarity. Hence, these web-based education is devised with an objective to pass on the knowledge of technology along with free and open source software (FOSS) to all the people in our country.

We at Shah & Anchor Kutchhi Engineering College are a team of Professors under the leadership of our Principal collaborating with IIT Bombay to take software education to the masses and to Bridge the Digital Divide!. We conduct workshops and tests on various open source software available at the Spoken Tutorials website https://spoken-tutorial.org for our college students. We ensure that every student takes up atleast one course test under SAKEC-ST every year. The successful completion of the online test, entitles our students for certificates obtained from IIT bombay. Thus we have almost every student with a minimum of four certified courses completed during the term of four years of engineering at our college.
We began our collaboration with Spoken Tutorials around 2013 with a small group of students on trial bases and now since 2015 we cover students from all branches and all classes every year.